Rather than artworks properly speaking, Aude Moreau stages artistic interventions in which she appropriates the exhibition space over a distinct period of time. By relating to and interacting with the space, the artist creates site-specific and ephemeral installations in which time plays a decisive role. The appearance of Moreau's works is thus to a large extent determined by the often time-consuming process of preparation and installation as well as by the prospect of its short lifespan.

The feeling conveyed by these interventions is one of urgency: the artwork as an object is not an end in itself but a mere stage in the artistic research, the consistency of which is underlined by its intrinsic ephemeral nature.

Entitled Tirer le ciel (Shooting the Sky), Aude Moreau's installation in the Casino Luxembourg's Project Room reproduces the firmament over Luxembourg. The stars are in effect bullet holes, produced using a wide range of calibres. Moreau's intention was by no means to stage a scientifically accurate illustration of the relative positions and sizes of the stars, for although this aspect guided her research and preparation, it was cast aside once the work was effectively made. From the first gunshot the artist thus accepted to relinquish control over the physical implementation of her work; hence, no subsequent alterations were made.

Visitors are confronted with a metaphor for man's attempt to measure himself with the universe by reducing it to his own scale. Since the dawn of time, man has been attempting to "read" the sky by projecting his own symbols onto it. Moreau's work inverts this process: the remote and untouchable are turned into matter and space, allowing for a direct interaction at a purely physical level - a confrontation that does not however elude fundamental metaphysical questions, which a closer reading of the work is likely to prompt. 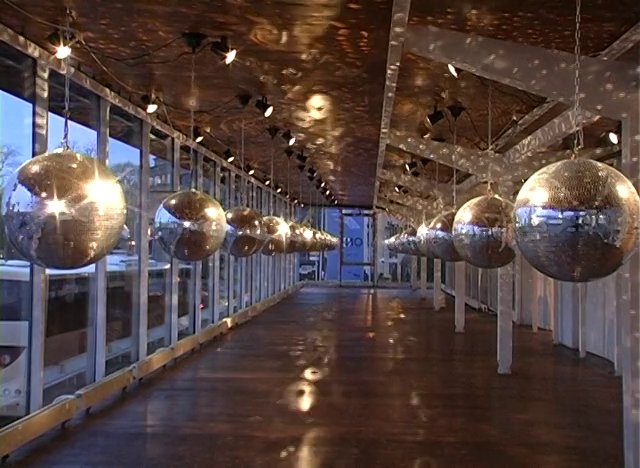 The photographic, film and sound works of Aude Moreau cast a hitherto unexampled light on the North American city, with its modernist grid, its towers soaring to breathtaking heights, its illuminated...

Working across text, sculpture and performance, Sophie Jung’s work navigates the politics of re/presentation and challenges the reductive desire to conclude. Her texts focus on disrupting...