The Screen Eye or the New Image takes the visitor on an intense visual journey through about a hundred videos in the broadest sense - including rare films from cinema, performance and theatre. The Casino Luxembourg's specially fitted out spaces plunge the visitor into a sensory universe where the image is paramount. The aim of the exhibition is to renew the experience of a medium that has today become central to contemporary art. Curated by Régis Michel, this show is initiated by Casino Luxembourg and realized in cooperation with the National Museum of Contemporary Art in Bucarest, where it will be shown in autumn 2007.

"Video art has long been a major art form. It has even become the major art of our time. But it is too often an invisible art. One can see but glimpses, and the public ignores most of it. That is why it is urgent to show the best of its recent products, which are also the most unknown.

The hundred videos displayed were produced during the last ten years by some forty artists of every origin, many of which are women. Some of them are already famous; others are to be discovered through the exhibition's specific layout, which focuses on the image to the exclusion of everything else.

This is not a retrospective, even less an inventory. The choice of works is highly selective, favouring narrative video with political, social or sexual issues. Each room corresponds to a different world, and the circuit, which is strongly thematic, does not dissociate analysis from affect. This is not a mere exhibition, but an experience - a critical one.

The new image, Deleuze said, produces a new eye which might be the screen-eye. It is also the machine-eye peculiar to a society of control ruled by video surveillance, which turns the subject into an automaton, and democracy into deception. The artist's function, Deleuze says again, is to resist by turning the camera against itself, and the eye against the screen...." (Régis Michel)

The technical equipment for the exhibitionThe Screen-Eye or the New Image has been made available by BTL Berlin. 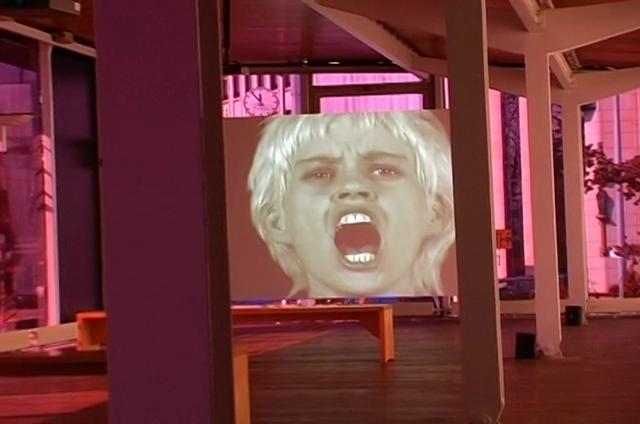